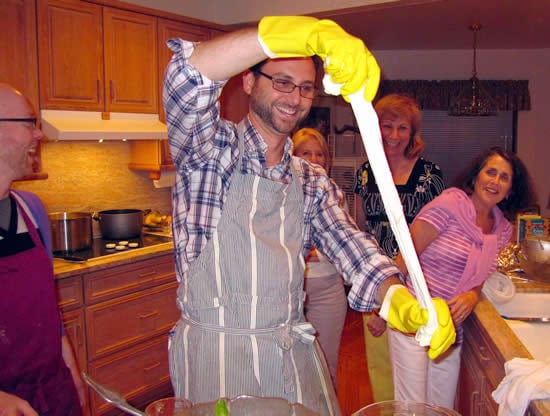 When I was a kid, my mom had a huge cookbook on a shelf in the kitchen called The Joy of Cooking.

I’m sure you’ve heard of it; it’s been around since 1931, and is in its 11th edition. I think my mom had the 1975 edition. I always loved the name of the book itself, and it was my go-to book whenever I wanted to try anything new in the kitchen — even something as simple as making hard-boiled eggs.

Although it was originally published during the Great Depression — at a time when seemingly not much joy was to be had, whether in the kitchen or elsewhere — I think the title is just as compelling today, 80 years later.

Last year, Tim Kreider published an excellent opinion piece in the New York Times called “The ‘Busy’ Trap.”  He’s referring to the increasingly common response of “Busy!” when you ask someone how they’re doing.  It seems we’re all busy, busy, busy with projects, emails, activities, deadlines, and the resulting inability to simply sit still. (I’m surely guilty of all of this.)

Today, in our world of “busyness,” too many of us think of cooking as a chore. It’s perceived to be as unpleasant as taking out the trash, brushing your teeth, or doing your homework. After all, we’re so busy, we barely have time to eat, let alone time to prepare a nice, wholesome meal from scratch! And let’s not forget all that time for the sheer drudgery of grocery shopping.

Well, I refuse to accept that.  The very act of cooking itself can — and should — be joyful! Cooking is transforming raw materials into something new, something enjoyable, something fundamentally satisfying and (ful)filling.  You’re creating. You’re making something. It’s as fundamental to human nature as our opposable thumbs. You get to sit back and say, “I did this,” which can bring a deep satisfaction into your life. (There can be tremendous joy in picking out fresh fruits and vegetables at the market, too.)

We all have the same number of hours in the day; it’s what we choose to do with those hours that matter.  Somehow, we have plenty of time to spend on Facebook, Instagram, and the like – all those “time sucks” that didn’t even existjust a few years ago. Americans now spend 34 hours a week watching TV. (Ironically, a lot of that time is spent watching other people cook!)

I know that if I choose to do so, I can find a lot more joy in cooking than I can by watching another episode of TV or by chasing the “infinite scroll” of my Facebook news feed.

Seven Ways to to Avoid the Freshman 15 (and Other Healthy Eating Tips)
Energy Balls and “Always, Sometimes, & Never” Foods