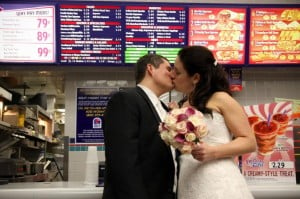 You can also order many regular items “Fresco Style” which reduce the fat by up to 25%. (I’m guessing they just drop some cheese or sour cream).  Look for the check mark in the far-right column of the nutrition table for this option.

Also, to their credit, they put the Fresco items right at the top of the printed Nutrition Information literature (and they very smartly use green ink to highlight them as a good thing).

Looking through their Fresco menu, they’re pretty good overall — except for the sodium. The Recommended Daily Limit of sodium is around 2,400mg… so one of these burritos (or two tacos) can be half your day’s allowance!

Beware of their salads — those are, somewhat surprisingly, the worst offenders on the menu.  (Just ’cause it says “Salad” doesn’t necessarily mean it’s healthy!)  However, if you get them “Fresco Style” they’re actually pretty good — it drops the calories from around 900 to about 220+… an amazing difference.

Don’t forget the condiments! I was pleasantly surprised to learn that all the Hot Sauces are just 7 calories per packet and (relatively) low in sodium (50-90mg each,  going up as they get spicier).  Watch out for the Zesty Dressing though — that’ll add 200 pointless calories and 250mg of sodium.

Be sure to check out the Taco Bell Interactive Nutrition Calculator — it’s very slick, and makes it a heck of a lot easier to figure out your total meal’s information, since I’m assuming you won’t be eating just one taco.

Any of the Taco Salads

Any of the Grilled Stuft Burritos

—
Menu Mondays are my recommendations for the most healthful options at chain restaurants. Although it may be tough to find “perfect” options when eating out, it’s important to choose “better” whenever possible, and I hope these guides will help make that easier for you.

These food are horribly bad for you why cant we just all live in a healthier environment and stop helping these food company get all your money.

Hi jedss – That’s a fair point. However, large chain restaurants are how most Americans eat when they dine out, and I’ve found it’s best to “meet people where they are.” So if we’re able to help people make better choices when they do eat there, and simultaneously push these companies to produce healthier food (by making those choices when at their restaurants), isn’t that also a win?

What about their new Cantina menu? It tastes better and seems healthier than their other items. More beans and cilantro.

Taco Bell is horrible for you I don’t care what they try and tell you. Hormone/ Antibiotic meat, with genetically modified corn/wheat tortillas? How could this be unprocessed first off and 2nd healthy? I say never ever go to taco bell ever. Everything there is processed and fake. fake cheese. All in organic among lots of other restaurants you have suggested. Im dissapointed that people are actually considering this.

I don’t eat at Taco Bell, either. I also agree, it’s definitely not “unprocessed!”

I write these guides because it’s not always possible to avoid chain restaurants, and like it or not, this is how most of America eats. My attitude is to try to improve things from as many angles as possible. For people who still eat at Taco Bell, or any other large chain, my hope is that this way, at least it will help them make better choices (or perhaps more accurately, less-bad choices.)

Frankly, I have mixed feelings about writing these posts. I continue to do so because people want the information. These posts get a ton of search engine traffic, and it’s because people are trying to improve their diets.

But yes, your point is well taken. 🙂

It’s through posts such as these that I stumbled upon your website and now am starting to become a huge fan of your work and guidance. I know it’s been years since the original post and likely things have changed, but I still want to thank you for stuff like this.

You mentioned sodium concerns often. What are the effects of taking in too much sodium in a day/meal?

The thing that’s really keeping me from going back to Taco Bell is the amount of Sodium… The US Recommended Daily Allowance of Sodium is 2,400mg…. Even most of the “best options” above area insanely salty, and set you back half a day’s worth of salt.

I put the Fresco Crunchy Tacos at the top of the list, specifically because they were lowest in sodium compared with all the other good choices. However, they’re still ground-beef — so they’re no good for vegetarians.

I especially like your recommending what to order and what not to order. Saves me the effort of figuring it out myself. Might even try a Taco Bell again after many years of passing them by.

Not that I EVER eat at Taco Bell (yuck!), a lot of people do and this is great info!! I like this post and will be looking forward to these Menu Mondays!!