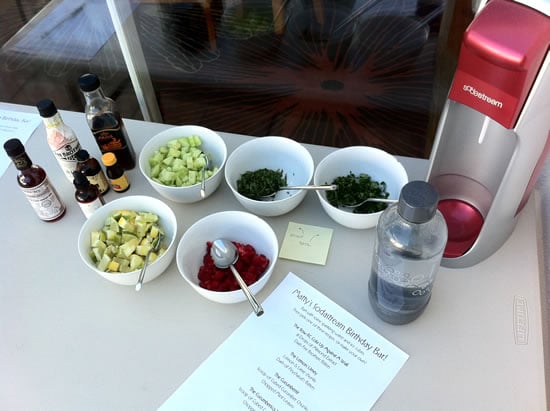 Last weekend we had a few friends over to celebrate Matty’s birthday. In addition to the BBQ bonanza (tons of balsamic-marinated veggies, citrus-cilantro shrimp, and soy-sesame halibut…), I thought it would be fun to set up a “SodaStream bar.”

In case you don’t know of the SodaStream, it’s a killer countertop kitchen gadget that lets you carbonate your own water. One CO2 cylinder (refills for $15) will carbonate about 60 liters of water. (Read my full Sodastream Home Carbonator Review).

When we first got the SodaStream, we tried their flavor syrups — and enjoyed them. That is, until we realized that they all have artificial sweeteners (if they used only sugar, it would require too much syrup).

Instead, we’ve been experimenting with other home-grown flavors. I’m a fan of adding a dash of Fee Brothers Bitters (the original “Old Fashioned” variety), which have a refreshing cinnamon flavor (Note, nothing’s perfect: The bitters include food dyes).  But take it one step further — say, a bit of Fee Brothers along with a dash of Almond Extract — and now we’re getting somewhere!

For the party we put together the SodaStream bar and encouraged folks to try some recipes — or to experiment and create their own. (I’ll be honest: Just about everyone added booze.)

Start with some sparkling water and ice cubes.  Then try some of these recipes…

The Slow RC Cola Up Against A Wall

The RaspberPeach That Gave Andrew A Headache The Next day

Have your own favorite Sodastream recipe? Please share in the comments!

This is a product I personally use and enjoy, and think you will too. If you click on the affiliate links in this post and then make a purchase from Sodastream, I’ll earn a small commission. Thanks for your support!

Ginger Syrup from a company called The Ginger People. Add some scotch and sit back and enjoy.

I just found this thread, years after the initial post.

I’ve had my SodaStream from the days when it was mail-order only and not sold in stores. One of the BEST gifts ever!

I’ve given up the SodaStream syrups too, but I do keep one indulgence…a NY egg cream. For this original Jersey girl it’s a fond childhood memory. We always had seltzer bottles delivered at home.

Mix some milk and chocolate syrup together, then fill the glass with seltzer. Pour slowly, as it really fizzes up. Amounts depend on your taste and size of glass.

For a real treat, add a scoop of ice cream.