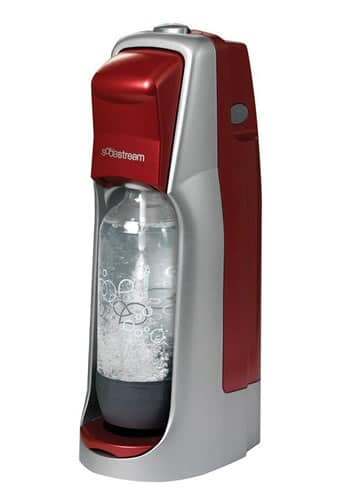 On the heels of our great debate about a Soda Tax, I thought I’d do a followup with a SodaStream Home Carbonator

Yup, it does its job. However, it’s only for carbonating plain water (you can add stuff to the water later, if you wish).  It takes about ten seconds to take a bottle of water out of the fridge, attach it to the machine, and press the button a few times.

They’re adamant that you should never carbonate anything other than water, and doing so will void your warranty.  (Nevertheless, I’m sooo tempted to try carbonating milk.  It might be worth it just for the viral video marketing potential.  Maybe next St. Patty’s day we’ll carbonate green milk.  But I digress.)

This is a no-brainer. It uses no electricity.  The bottles can be reused again and again, though they do have an expiration date about three years in the future.

It’s fun when you have people over for dinner and you can make seltzer instantly for them.  Great conversation starter, and fellow foodies get a real kick out of it.

I just finished our first CO2 tank.  I’ll guess I’ve averaged about two liters per day, so we’re right on par with their “makes 60 liters” claim.

Let’s say a liter of seltzer at the store is $1.50.  For $99 — my initial equipment investment — I’d get 66 bottles of the store-bought stuff.  So after going through just the one CO2 tank that came with the setup, I’m nearly break-even already.

If I had to actually buy that much seltzer from a store, I certainly wouldn’t drink as much of it. Lugging a 2-liter bottle home for every day of the week?  No thanks.  And if I had to pay a buck-fifty for each liter I drank, I certainly would think twice and have plain water a little more often.  Even with the increased consumption, though, it still costs less.

Then there’s the Sodamix Flavors.  For $5 to $7 you get enough syrup to make about 12 liters, so tack on another 41 to 58 cents per liter.   All told, a liter of home soda costs about 75 cents — which is still cheaper than the store-bought stuff.

All The Soda Flavors Include Artificial Sweeteners.

Why?  The artificial sweeteners are so much sweeter than sugar that they need to use much less to achieve the same sweetness.

The bottles of syrup are about a pint, but if they used only sugar as a sweetener, they’d probably be about the size of a 2-liter bottle — which would make shipping and storage much more costly.  That would also require different-sized bottles for the regular and diet flavors, which would further complicate matters.

(Next time you’re at the grocery store, hold a box of regular Jello mix in one hand and a package of artificially-sweetened Jello mix in the other.  You’ll see exactly what I’m talking about.)

Acesulfame-K requires special mention here.  Center for Science in the Public Interest claims that Sucralose is considered safe, but Acesulfame-K should be avoided.

Moreover, it’s been shown that Acesulfame-K can trigger insulin release, and may cause a reaction similar to low blood sugar levels (fatigue, disorientation, irritability).  Ironically, this could cause people to eat more, thus promoting weight gain — but that’s for another conversation.

Although the FDA deems it safe, it definitely seems that more testing of Ace-K is needed.

Though I haven’t tried them, they also offer “MyWater Flavor Essences” — which are unsweetened syrups containing “natural flavors.”

Careful, though:  “Natural flavors” are not real foods; they’re made in a lab just like artificial flavors.  (They’re allowed to be called “natural” because they are actually derived from the food they taste like, unlike “artificial” flavors.)

I really like the Sodastream Home Carbonator.  It’s a great product, well built, easy to use, and does what it says it does.

I originally wrote this post in 2011… and with this update in 2016, our Sodastream is still going strong after five years. And, we still use it Every. Single Day.  It’s atually the only “unitasker” in our house that gets used regularly, and has been one of the best kitchen investments we’ve ever made.

This is a product I personally use and enjoy, and think you will too. If you click on the affiliate links in this post and then make a purchase from Sodastream, I’ll earn a small commission. Thanks for your support!

I just got one and I love it, though we haven’t tried any of the flavors (even the free samples it came with). Usually I just use a slice or two of lime, but I have also done fruit shrubs (fruit, vinegar, sugar) and the liquid from my pickled cranberries (which is basically a shrub). I figure mine is especially cost justified since it is sometimes replacing beer 😉

Thanks! I’m looking into some of the ideas for sodas!

I bought the machine and then was shocked and disgusted when I found out that the diet and non-diet mixes all have Ace K and sucralose in them! Ace K sounds like it could turn out to be the next notorious artificial sweetener that contributes to ill health! And Sucralose is not natural like they claim and can cause some problems for some people. So deceptive of the company to try to hide the fact that the non-diet mixes have artificial sweeteners! I’d be willing to bet that they are just concerned with maximizing their profits and don’t care at all that their soda mix products are not at all healthy or natural. I’ve only seen a single kind of soda mix they put out that has only sugar without those nasty artificial sweeteners. I’m looking for alternatives to those Sodastream soda mixes.

Yep. We still love our Sodastream and use it regularly — but don’t go anywhere near any of their flavor mixes.

A couple of years back I posted The Soda Stream Bar which has some flavoring options. (One note: A lot of the bitters used in those recipes have natural flavors — something I’m shunning now much more than when I wrote that post originally).

Dear Andrew:
I only have first impressions, having used the machine only for a week. The diet grapefruit, Dr. Pete, and root beer flavors are delicious! But I think reordering will only be the diet grapefruit; in other areas I still think we can do better. I remember an old cream soda recipe using honey and vanilla I’m anxious to try, and I’m ordering some after-market syrups for experimentation. And of course, the main reason my family bought the machine for me in the first place: chocolate ice-cream sodas! For that, you just need club soda, vanilla ice cream, and chocolate syrup.

You could try adding a dash of vanilla to the cola syrup – vanilla is the flavor that makes Coke so distinctive.

Coke is also somewhat less sweet than Pepsi or RC.

We’ve actually stopped using the syrups completely. The artificial sweeteners were really problematic for us.

Found this on Wikipedia – funny how the last sentence rings true with my earlier comment!

SodaStream is the name of a brand of home carbonation systems that was invented by Guy Gilbey in 1903.[1][2] Later versions allowed the addition of concentrates to create carbonated flavoured beverages. It was popular in the 1970s and 1980s when there were a number of brand name syrups available,[3][4] and, after the company merged with Soda-Club in 1998, it was relaunched with an emphasis on healthier drinks. Soda-Club is currently head-quartered in Israel.[5] and has production facilities in the Mishor Adumin.[6]

In the UK (where it was first sold) the SodaStream machine is strongly associated with 1970s/1980s childhood nostalgia.[7][8]

Very cool – thanks for posting this!

Here’s the link to the Wikipedia page:
http://en.wikipedia.org/wiki/Sodastream

Its interesting to see the resurgence of SodaStream. When I was a kid my grandad had one – it fascinated us and enthralled him. I guess we are talking around 1978-1980 time (in the UK)

I thought it had died a death along with VHS tapes and Sony Walkmans, but here it is again, not looking all that different 30 years on. I might have to get one in memory of my grandad!

Interesting, indeed! I had no idea SodaStream has been around that long.