Monique Hartl is a pilot-year certificate student at Just Food’s Farm School NYC, and an apprentice at Bushwick Campus Farm (part of EcoStation:NY) Professionally, Monique has spent more than ten years as a marketing professional working to engage people in purpose-driven brands and movements that lead to people making more conscious choices and leading healthier lives for brands like Recyclebank, National Geographic Green Guide and currently for Daily Feats. You can find her on Twitter at @greencitygrrl. 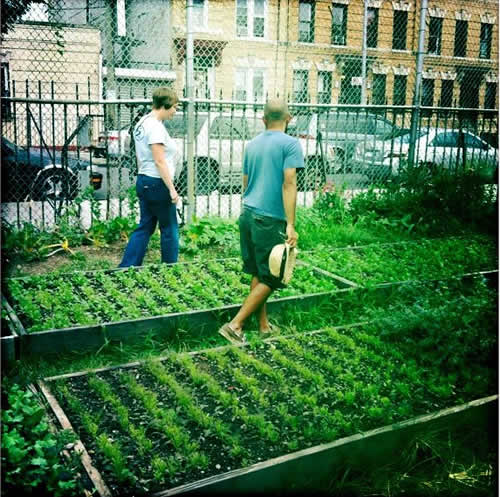 This October marks the first time I’ll be participating in the October Unprocessed Challenge. I’m excited about cooking more, and with that to explore new flavors, and upping my skills in the kitchen.

I’m also really looking forward to expanding the way I use the fresh produce I get each week from my CSA and local farmers market.

In fact, according to The Food Empowerment Project, in New York City, where I live, “an estimated 750,000 New York City residents live in food deserts, while about three million people live in places where stores that sell fresh produce are few or far away.” 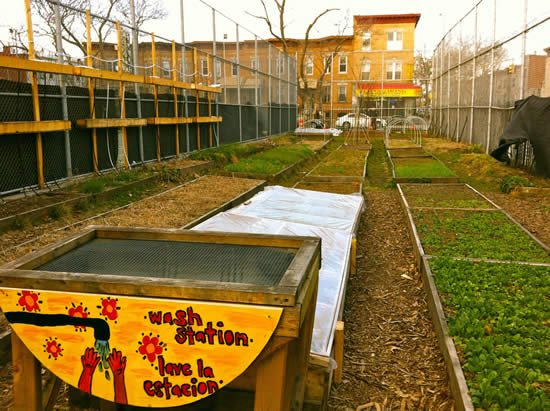 These facts are just some of the things that drew me to the urban farming movement. I first became fascinated by the idea of green roofs, because of the philosophy of replacing the ground on which we’ve built upon in the city. Combining that notion with being able to produce food for the residents below, and I was hooked. Also, it just never made sense to me that in the city “that never sleeps,” that we didn’t have the ability to feed our residents with food grown in our local region.

So, two years ago, after attending various workshops, lectures, and meetups, I was accepted into the pilot year of FarmSchool NYC – a program of Just Food, whose mission is to train NYC residents in urban agriculture, in order to build self-reliant communities and inspire positive local action around food access and social, economic, and racial justice issues. In short, we learn to grow across the five boroughs, teach and inspire others to demand fresh food for all New Yorkers.

In our program, we study across community gardens, on rooftops, and within school grounds across the city, and are taught by grassroots leaders (urban farmers, gardeners, and food justice advocates) who know NYC’s unique communities and food issues best.

In our classes, we focus about half of our time learning farming and gardening skills, and the other half on community organizing, food justice, and community food arts.

FarmSchool students currently work in all five boroughs of New York City on projects that range from using hydroponics to grow locally inside or on rooftops, to working with incarcerated communities to grow food for the institution and teach meaningful skills. Other students work with faith-based immigrant groups to increase food sovereignty for those communities.

The thing I love about farming in the city is the connection to the communities we work in, and being able to feed our neighbors the freshest and healthiest of foods.

Right now, as an apprentice at Bushwick Campus Farm (part of EcoStation:NY) in Brooklyn, we grow fresh produce in a street-facing lot on school grounds and in our greenhouse, plus hold farmers markets across Bushwick for local residents, as an alternative/supplement to grocery stores in the area.  People also really connect with being able to see the crops in the field behind our farm stand and speaking with us about what is growing. 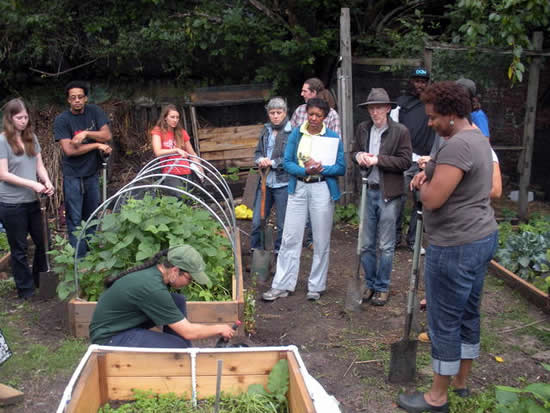 Below are some resources if you’d like to learn more about urban agriculture and local food production:

I would encourage you, as you go through October Unprocessed, to take a little time to go beyond thinking about fresh foods, and learn about what’s growing locally in your area, and who’s growing it for you.

Have you made any local connections around food in your community? Tell us about it and where you live so others might be able to find new resources where they are. 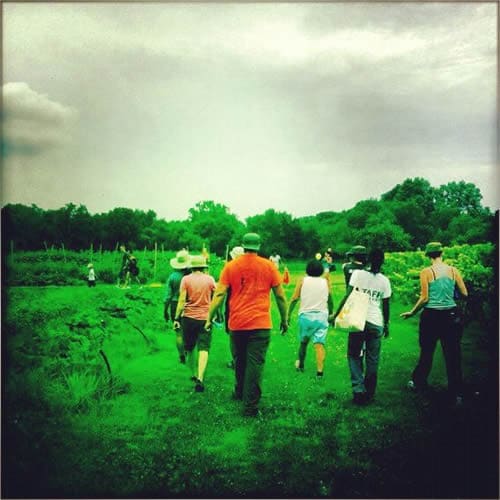 Wow – really wonderful, Michelle I missed that one. Do you know what city that was in?

Great article and inspirational. I was also inspired last month by an article in Whole Living that talked about a group who had mapped out all the public fruit trees in the city and then had volunteers go collect all the fruit as it ripened each week. Between that, leftovers that volunteers collected from restuarants and farmer’s markets at closing, they were getting 40,000 lbs of food a month. Think of all the families that could be fed. 🙂

My local community centre has identified a similar situation and has started a community garden. They have also given away fruit trees for people to plant in front gardens and street fronts to encourage foraging of healthy foods once these trees are big enough. In my community its not lack of space to garden -I am not living in the center of a city but a subburb where most have a yard but there is a lack of knowledge. Sadly the art of cooking these fresh foods is also being lost for some who grow up eating packaged food from the supermarket or fast food outlets so there is a need for cooking instructions and cooking lessons as well.

A friend of mine and I are going to be starting this at my son’s middle school and this article is so helpful. This is a great list of resources and I am so excited to learn more!

I’m trying to come up with a comment that adds to the conversation, but I’m failing. I’m just so excited to see initiatives like this and think it’s so so so important. My friend’s boyfriend works on an urban farm in Queens and it’s wonderful. (See also: Milwaukee, Wisconsin.)

Stacy – Is it the Queens County Farm (http://www.queensfarm.org/)? It is a wonderful place.

Monique, it never occurred to me that there were places in this country where fresh foods were not available. Thank you for sharing about the important work you’re doing!

This is really awesome work you’re doing and something that I am just all about! Thanks for sharing and following you on Twitter too!