Home » Recipes » How to Make... » Gratitude and Garlic

By Andrew in How to Make…; Strategies; Veggies & Sides
Published on November 14, 2017
Jump to Recipe
949 shares 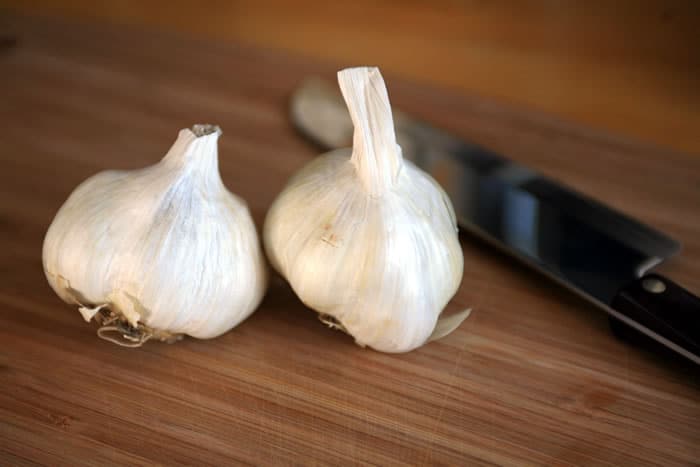 (I originally published this in 2011, and I thought I’d bring it back to the top of the stack and share it with you today, with a few updates. I hope you have a wonderful Thanksgiving, filled with love, family, friends, gratitude, and garlic.)

I don’t remember if it was my first or second Thanksgiving as a vegetarian, but mom wanted to be supportive of her teenager, so she bought me a Tofurky.  This was before the Tofurky brand had all sorts of fake meats, and even before veggie meats were in just about every grocery store. I suppose it was a bit ahead of its time.

It was a “fake turkey kit” that came in a plain cardboard box and cost somewhere around $35 (and that’s circa-1991 dollars!).  If memory serves, the package included a quasi-turkey-shaped loaf, some bread crumbs to be stuffed into the cavity of the “bird,” and fake skin that needed to be stretched over the whole thing.

It was pretty gross.

I think they’ve improved it since then (and you can now find them much more easily; I think ours might have actually been special order), but I wouldn’t know for sure — that fake skin was scarring enough that I’ll never go back down that road.

Every year since, instead of trying to fit in, I just filled my plate with plenty of side dishes. But there was a small part of me that did still feel like I was missing something. After some consideration, I decided that a good solution is to come up with a new tradition. Instead of focusing on what I can’t have, I came up with up with something else I love, and simply chose to make that a part of the holiday. 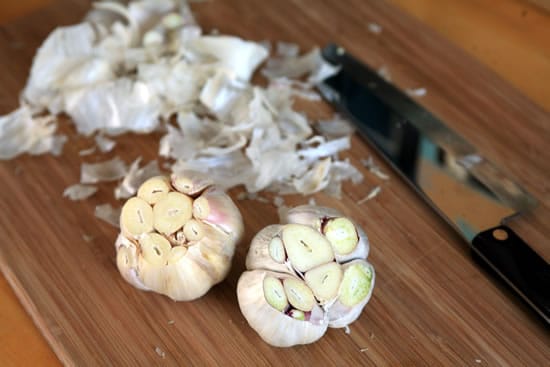 The other night I roasted some fingerling potatoes and tossed a few whole garlic cloves on the baking pan, just for kicks. I was surprised at how giddy I became when I snapped up those little morsels of sticky-sweet-garlicky-goodness.

That’s when I realized that roasted garlic absolutely had to become the new Thanksgiving tradition for my family. Nowadays, even though I’ve started eating turkey again (we get ours from Harvest Gathering Farm), I’ve continued the garlic tradition. It really is a wonderful addition to the meal – it’s like an additional condiment.

To make it a little more festive, rather than peeling each clove and roasting them separately, we go with the whole-roasted-bulb style. It’s simple and easy. Better yet, considering how much competition there is for oven space during The Big Day, you can prep them early and then just place them directly on the oven rack, fitting them around whatever else is baking.

I should probably plan on making breath mints a new Thanksgiving tradition too. Happy Thanksgiving, everyone! 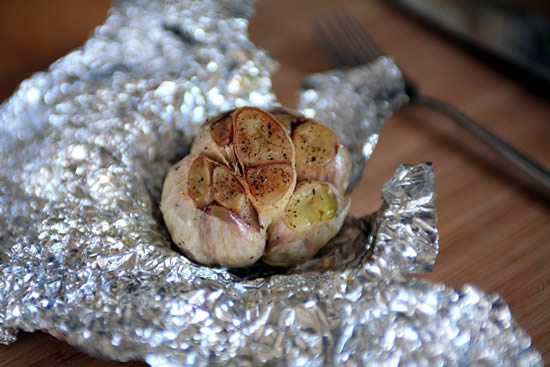 Wrapping the garlic in aluminum foil makes it easy to fit around other items in an already-full oven. One large head of garlic is enough for 3-4 people, depending on how much they like garlic, of course.
Course Side Dish
Cuisine Vegetarian
Prep Time 5 minutes
Cook Time 40 minutes
Total Time 45 minutes
Yield 3 Servings
Calories 25 kcal
Author Andrew Wilder

949 shares
All the October Unprocessed 2017 Posts in One Place
Twice as expensive, three times as good

We all know that garlic is very useful ingredient for health. You made a recipe of it that is really exceptional. Thanks for sharing roasted garlic idea with us.

Geez, actually first time to try the roasted garlic and it is actually not that bad 😉

A number of studies have found that garlic reduces elevated total cholesterol levels and lowers blood pressure more effectively than placebo.However, the extent to which garlic is effective is small.

You remember it well. But I remember how we struggled to make it look like some resemblance of a turkey. Failed miserably. LOL I will look forward to the roasted garlic 🙂

You know how much I love garlic… and the Greek rule is, everyone in the room must eat it too!

What a heart-warming article. Thank you for sharing your experience Andrew. I too will be focusing on what I CAN eat this holiday season <3

One great thing to do with roasted garlic is mash it into avocados and minced red oniom with cayenne, salt, and freshly cracked black pepper. My kids beg for this guacamole on toast with watermelon for lunch in the summer.

Also for those who don’t like aluminum touching their food, you can line the foil with parchment. Enjoy!

I am a garlic head. In fact my nickname is Garlic Girl! How can one live w/o it???!

one whole head of garlic serves 3 or 4? I could eat it all myself. 🙂