I’ve been suffering from a lingering sore throat for the past few weeks, and I finally went to my doctor a couple of days ago. One of the things he recommended was to gargle with Listerine Antiseptic mouthwash. So this afternoon I went to our neighborhood pharmacy to pick some up.

I was excited to find the bottle of “Listerine Naturals” mouthwash. Inside the bottle was a clear liquid, a noticeable contrast to the impossibly blue “Cool Mint” version sitting on the shelf next to it. Eager to figure out the difference between the regular stuff and the “natural” version — especially since I’m always skeptical of “natural” claims — I started comparing the labels.

The bottle of “Naturals” proudly boasts that it’s “Equally Effective” as the regular stuff, and it is a “99% Natural Formula.”  Upon closer inspection, it’s easy to see how they make the effectiveness claim — the active ingredients are exactly the same. But if you check out the inactive ingredients, it’s a surprisingly similar list. In fact, only three ingredients are different! 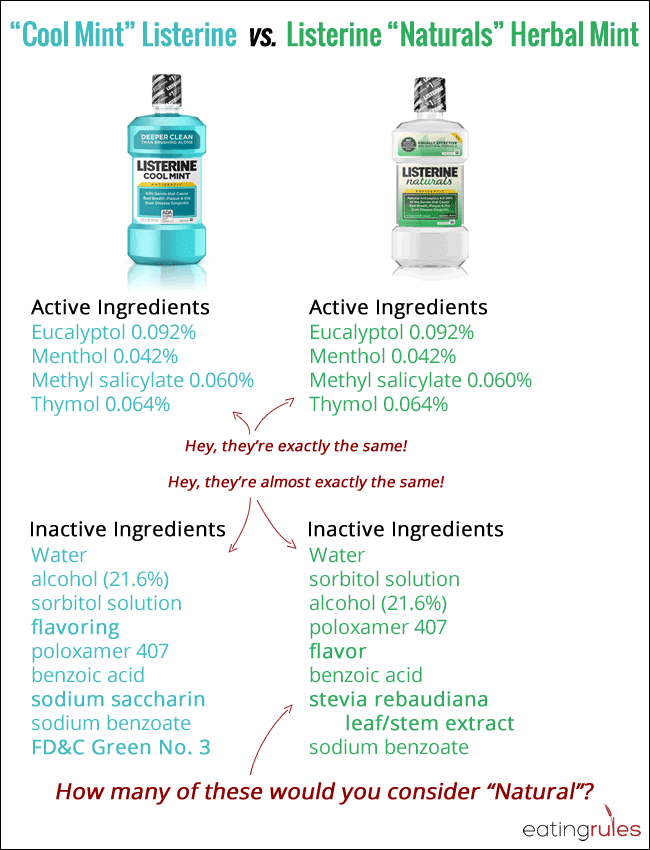 The first difference is “flavoring” vs. “flavor” — so that could be anything, natural or otherwise (and they’re most likely otherwise).

Then they’ve replaced the sodium saccharin (an artificial sweetener) with stevia extract (which may or may not actually be natural, depending on how it’s been extracted and what else has been done to it).

Finally, they’ve omitted the FD&C Green Dye (which also happens to be banned in Europe). That one, I’ll admit, is a significant improvement.

As for the remaining ingredients in the “Naturals” version, I’d argue that the vast majority of them are not truly natural. Yes, they may exist “in nature” in some form, but most of these have been produced through industrial processes. Sorbitol, for example, is a sugar alcohol that is usually created for products by adding enzymes to corn syrup, most likely derived from genetically modified crops. And probably the least “natural” of the bunch? Poloxamer 407, which is “a triblock copolymer consisting of a central hydrophobic block of polypropylene glycol flanked by two hydrophilic blocks of polyethylene glycol,” according to Wikipedia.

So let’s not be fooled. Listerine “Naturals” may be a slight improvement over the regular stuff, but it sure as heck isn’t actually natural.

287 shares
How to Make Bone Broth
Keeping Up With Molly