By Andrew in Nutrition; Strategies
Published on March 29, 2011 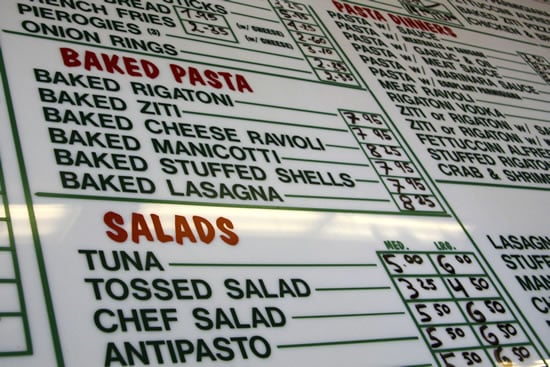 A friend recently emailed me for advice on how to determine which foods are more healthful than others. Great question!  The answer really does merit significantly more than a blog post (hey, that’s why we have nutritionists and dietitians, right?), but here’s where I start the process:

First, realize that there’s no one way to determine if a food is healthier than another. Sometimes it’s obvious (fettuccine alfredo vs. steamed veggies), but usually it’s much more nuanced and there isn’t necessarily one right answer (veggie burger vs. turkey burger).  Or worse, the choice that seems like great one is actually far more unhealthful than the other option (chicken caesar salad vs. chicken breast sandwich).

There are some existing systems to help figure this out, of course, such as Weight Watchers or the ANDI scale, but none of them is perfect.  (Weight Watchers has the specific goals of weight loss or maintenance, and the ANDI scale is per ingredient, not per meal or recipe, and simply looks at nutrient density. Both can be useful, but neither gives you the whole picture.)

Before you start reading labels, it’s important to go to the official US Dietary Guidelines. Even if it’s not a perfect system (cynics, take note: The guidelines may be influenced by politics and the myriad food lobbies), those numbers give you a framework of the minimum or maximum of  each macro- and micro-nutrients you should be eating each day. For example, if you don’t know that you should be eating 2,400 calories a day (or whatever is appropriate for your age, sex, activity level, and overall health), there’s no way to know if that Shrimp Diablo Burrito (clocking in at 1,060 calories) is a good choice for dinner (hint: it’s not.)

When comparing similar food options, I generally look at the calories first — I find that to be the single most useful indicator.  If a dinner is 450 calories and will be filling and satisfying, it’s probably a good choice… if it’s 750 calories, it still might be okay, but it’s not necessarily the best choice.

After that, I look at sodium. Most prepared foods are outrageously high in sodium (recommended limits are around 2,300mg a day).  A single restaurant meal entrée appetizer can easily blow past that number.

I then glance at the saturated fat content (which should be relatively low, especially if it’s coming from animal products) and fiber (the higher the better, as long as it’s not from added fiber, like inulin. Added fiber isn’t necessarily bad, but it’s cheating, and shouldn’t count for our purposes here).

The final aspect to consider is to look at the big picture, not just that one meal. When you’re choosing between entrées, it’s helpful to also consider how different this food is from your previous meals. More variety is more better!

You can’t eat by the numbers alone.

So how do I put all this together?  This is where it becomes more of an art than a science, and it’s exactly what I have to do when putting together my Menu Monday recommendations.

Let’s look at three sandwiches from an actual restaurant:

(I was going to leave off the type of sandwich, but that becomes an unrealistic comparison.  You have to know what you’re eating, because that factors into the decision, of course!  You can’t eat by the numbers alone.)

So, which would you choose?

The calories are all reasonable; you’re probably okay with any of them (depending on what else you’re eating that day, of course).  The saturated fat varies a little bit, but not hugely. They’ve all got the same fiber.

So that leave us comparing the sodium and the protein.  The Turkey & Ham is off the charts for sodium (1/2 your entire day’s allowance), so let’s rule that one out.  The Chicken is high in sodium (about 1/3 of your days allowance).  So that leaves the Veggie, at a much more respectable (but still a little too high) 505mg.

But wait!  The Chicken Sandwich has significantly more protein than the Veggie.  It’ll be more filling and probably keep you fuller longer.  If you’re going to eat the Veggie sandwich and be hungry again in an hour (and then grab a candy bar out of the vending machine), you’re probably better off going with the Chicken. On the other hand, maybe you know that the Veggie is filling enough for you, and you’ve got a banana on your desk, ready to go.

See my point?  You have to weigh all these decisions (and frequently do it all in a split second), and decide what’s right for you, and what fits into your big picture.

Don’t be afraid to take your time, even if there’s a line of folks behind you. Think it through before you order, and then after you eat, pay attention to how your body responds. Learn from each experience. Know yourself, know what you’re eating, and listen to your body. That will go a long way towards helping you decide what’s right for you.

Missed my nutrition facts panel guide last year?   It’s a one-page PDF that you can print and stick to your fridge or take with you when you go shopping.

How do YOU determine which foods are healthier than others?  Share in the comments!

Hi Andrew, my compliment for this post! As a dietitian, I know, how difficult it is, to answer these questions about the healthy food. You brought it to the point: “More variety is more better!” And it depends on the “how much” (as you also said,comparing calories…). If somebody eats a bar of chocolate, because he/she is lovesick, don`t worry, it might help. But eating a bar of chocolate every day, won`t be the proper substitute for bread. You`re also right, that the American, as well as the European diet is full of protein. From the medical point of view, it is abundant enough, to eat meat two times per week. To raise the consume of vegetable and fruits, the “5 per day”-rule still might be helpful. This means, trying to eat 5 portions of fruits and vegetables per day (one, as big, as a persons handful). This could be… Read more »

I also think about what else I may be having as a side. In this case I’d get the veggie sandwich, but look for a side of hummus or bean salad. 🙂 Or even avocado to add some healthy satiating fat.

When reading your line about how many calories you need in a day, I missed the comma and read it as “sex activity level”. Made me laugh. 🙂

One note about the protein: 28g is an ounce. Twelve gm is just under half an ounce. Is half an ounce (maybe a tablespoon?) of protein worth all the extra sodium? I don’t think that amount of protein is going to keep me that much fuller for that much longer.

IMHO, people forget that a gram is teeny. In school they taught us a gram was how much a paperclip weighs. Not much.

My whole argument is dependent on how much protein we think we need in a day. The average American eats waaaay too much as it is, so my vote would be for the veggie sandwich.

Thanks for this great point, Liz! I completely agree about the American diet having too much protein. I’ve actually started leaving our the protein numbers when I do my Menu Monday reviews, because it’s largely irrelevant (or worse: having someone see those numbers and choose one item over another, just because it has more protein — exactly what you’re talking about). However, those extra slices of roasted chicken breast aren’t 100% protein, so it’s not a gram-for-gram comparison. An ounce of chicken breast (28g) contains roughly 7g of protein (source). So to get an additional 12g of protein on a sandwich, you’re looking at probably two ounces of chicken breast — and that’ll mean two slices of meat. That might be enough to keep someone fuller longer, which speaks to my larger point of looking at the big picture. Again, it’s all about knowing what works for you, and choosing… Read more »

Great info. I agree with the above posts. I stick to whole fresh foods, no processed foods at all. That way I know what’s in it and how many calories. If you do eat out, order the dressings on the side, so you control your salad or your steak calories. Drink a glass of water before you eat anything. Add a squeeze of lemon juice or apple cider vinegar. It reduces your appetite.

All great strategies, thanks! Though I do wonder about the lemon juice/vinegar in water trick. I’ve heard it before, but seems anecdotal. I wonder if any studies have been done? Hmmm… (either way, it certainly won’t hurt!)

Thank you for this, I love it. My husband often asks me if a specific food is healthy or not. If I say yes, he thinks that means he can eat as much of it as he wants. (If I say no he usually eats it anyway.) He wants an easy answer, but as you point out it is a little more complicated than that. I like looking at the numbers just for fun and for future reference, but most of the time when I’m choosing something in the moment I don’t want to get that detailed. I try to choose something that has as much vegetables and whole grain as possible. Those are the hardest to come by so I make them a priority. Even protein I don’t think I have to try too hard to get enough. I make sure nothing is fried, and I ask that sauces… Read more »

Glad this post is helpful for you. You make a really good point about needing a “shorthand” way to choose one food over another. I always start with my three rules — eat only whole grains, no HFCS, and no trans-fats or deep-fried foods. Beyond that, I do start looking at the numbers… but I’m also a compulsive label-reader, so I can’t really help myself… 🙂