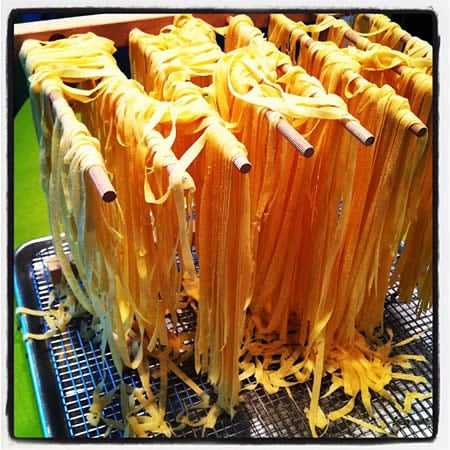 In the past few days, I’ve been getting lots of questions about which foods do, or do not, pass the Kitchen Test.

Before I offer any suggestions, I’d like to shout from the rooftops that more than 1,200 people have now taken the pledge!  I’m getting goosebumps as I type this (seriously). And in case you still can’t tell just how excited I am, I’ll give you a hint:  A. LOT.

If you haven’t signed the pledge yet, I hope you’ll head over to the October Unprocessed page and do so right now.  There’s something very powerful about signing your name, even if it’s just a little online form.

I’m also incredibly grateful for everyone who has helped spread the word about the challenge with others. It’s because of you that so many people are now involved. Thank you.

Everyone can also now show their support by adding an October Unprocessed “Twibbon” to your Twitter and Facebook profile pics!  Neat!

Okay, so let’s talk about some items that do (and don’t) pass the kitchen test.  If you haven’t yet read last year’s discussion of “Defining Unprocessed,” please start there first.

I’m the first to admit that it can get a little confusing — and it’s also a work-in-progress. Considering how many different ways food can be “processed,” it definitely gets tricky to nail it down in one concise sentence, while still keeping the “good” and elimating the “bad.”  (I’m using those terms loosely.)

The kitchen test works well for me, and it seems to resonate with a lot of people.  But if it doesn’t work for you, I encourage you to use (or develop) your own definition of “unprocessed” as you proceed throughout the month.

The general way I figure out if something passes the kitchen test is this:

First, if its a single ingredient, I try to figure out if I could grow/create/produce that ingredient at home, at least in theory.  If so, then it’s fine.

The whole idea, ultimately, is to read the label (if there is one) and consider each ingredient in your food: How it’s produced, where it comes from, and whether its benefits outweigh its detriments.

Also, a note regarding the “deliberate exception” clause:  The idea is to decide on any exceptions before we start, if possible.  It’s not there for you to use your exceptions as a way to cheat in the moment. Instead, it’s about making an informed decision, in advance, about a particular food.

For example, last year Matty and I decided that Vital Wheat Gluten would be an acceptable food for us, because we’d rather eat whole grains breads (usually baked ourselves) that’s made with some extra gluten, than to eat breads made with refined grains.  Similarly, Seitan, which is made from wheat gluten, was an acceptable food for us. (You can make seitan at home from flour, though most commercially-produced seitan is made from vital wheat gluten, which you could not make at home.)  We carefully considered both of these, and decided that the “pros” outweighed the “cons.”

Okay, so below I”ll try to address some specific foods that keep coming up. I don’t have all the answers (and I’ve been spending a lot of time on Wikipedia lately), and if you’re more knowledgeable about a particular item or ingredient, we will all benefit from your sharing in the comments.

I’m starting with an easy one.  Many people (self included!) make pasta and bread at home (and if you haven’t done so, I certainly encourage you to try it this month — it’s divine!).  The trick with store-bought breads and pastas is that you’ll need to read the ingredients list.  If the list says “flour, water, yeast*, salt” then you’re good to go!  But if it includes dough conditioners, refined sugars, artificial sweeteners and/or preservatives, then it doesn’t pass the test.  Similarly, store-bough pasta is usually made with just flour and water (or flour, water, and eggs). Dry pasta is fine (you could do that).  Just keep an eye on the ingredients!

* My thoughts on yeast are below.

Although I encourage 100% whole grain flours, since I’m all about the whole grains, strictly speaking a refined flour may pass the kitchen test.  Theoretically, at least, you could grind up some wheat and run it through increasingly finer sieves to get down to just the endosperm. However, if it’s bleached, or “enriched,” you couldn’t make that at home.

Yes, these are all okay, provided they’re made with the same ingredients you would use if you were to make them at home.

I make cheese, and I have friends who make fabulous beer, wine, and even spirits.  All doable in a home kitchen (though officially I don’t sanction home-distilling!)

If the cheese is of the “pasteurized-processed cheese food” variety, then it’s off the list, of course.  Similarly, if you’re mixing your booze with a pre-made mixer, check the ingredients — they usually contain high fructose corn syrup.  Also note, if it’s a jug of mix that contains alcohol, they’re not required to disclose the ingredients. Those are likely sweetened with high fructose corn syrup, and often contain artificial flavors, but you have no way of knowing for sure.

Yes, you can have these!  Although it would be difficult (and time-consuming) to grow, harvest, and roast/dry your own coffee or tea, it’s certainly possible.  Just keep an eye on what you’re putting into your coffee or tea!

People have been making soy sauce for thousands of years, and it is certainly possible to do at home (though it takes awhile).  The hard part will be finding a store-bought option that doesn’t have added preservatives.  If anyone knows of a brand that doesn’t have preservatives, please share in the comments.  (There are also some “soy sauces” that don’t actually contain much, if any, soy, so those definitely don’t pass muster.)

Sidebar: Kikkoman has an interesting tour of their (modern) technique for making soy sauce.

Sugar can be tricky as well, as we discussed last year.  Depending on the level of processing, you may or may not be able to make it (again, in theory) at home.  Last year, the consensus seemed to be that date sugar, evaporated cane juice, raw/unfiltered honey, and maple syrup would all be acceptable sweeteners. An approximation of Turbinado (“Sugar in the Raw”) and Muscovado sugars could probably be made at home, too, though the current industrial process to make them is probably a little bit different than what you’d be able to do at home.  I’ll leave it to you to decide if those are acceptable or not for October.

Refined, white sugar definitely does not pass the test, since it’s likely been bleached with sulfur dioxide.  If an ingredient on a label says simply “sugar,” unfortunately it’s probably of the bleached variety.

Another one that can be tricky.  Raw milk is certainly fine, though that’s obviously hard to find (and may even be illegal). If you’re buying it in the store — and it’s been homogenized — then it doesn’t pass the test. (Pasteurization is less of a concern with regards to the test — since pasteurization is just heating to a specific temperature, for a specific amount of time).  Having said all that, if you think it’s better for you to drink milk, homogenized or otherwise, it seems reasonable to make a deliberate exception.

You may also want to read this recent article about milk on Grist.

[Added based on a question in the comments.]

Assuming you decide to allow homogenized milk, then plain, traditionally-made yogurt should pass the kitchen test. People have been making yogurt in their kitchens for centuries.  As always, you’ve got to read the ingredients on the storebought stuff — inulin (added fiber), flavors, or dyes are definitely dealbreakers.  If they add gelatin or pectin, that’s a different issue — either of those could be made in your kitchen (I think), but neither is an ingredient typically found in home-made yogurt.  I’ll leave that one to you.

I’m a huge fan of plain Greek yogurt sweetened with fruit (and maybe a little raw honey and slivered almonds).  Fage is my favorite because it’s less tart and works well as a sour cream or mayonnaise substitute. (I have no financial ties to them; I just like it.)

Both of these are actually fairly easy to make at home (stay tuned, more on this in October…hint, hint).  As with any other storebought product, though, you’ve got to check the ingredients.  Many add sugars, flavors, and even gums to make it “creamier.”  There are quite a few storebought options, however, that have ingredients lists like “Water, Soybeans.”  Those pass the test with flying colors!

These are somewhat fuzzy, but with some consideration, my personal choice is to allow them.  People have been using baking soda for hundred(s) of years, and although you might need to be a chemist to create it, it is such a basic ingredient — that doesn’t seem to have a downside — that it seems counter-productive to exclude it.   Similarly, baking powder is simply baking soda with an added acid.

And yeast? Just a minute or two with Google, and I’m convinced I could cultivate my own yeast at home.

So even if these may not pass the “letter” of the kitchen test, I think they do pass the “spirit” of the challenge, and as such I’m making them a deliberate exception for myself.

[Update: Tracy makes a persuasive argument in the comments below that Baking Powder should NOT be allowed. She also includes some alternative recommendations. Thanks!]

Last year we decided that lecithin, which is used as an emulsifier in most (but not all) commercial chocolate doesn’t pass the kitchen test, since you wouldn’t add lecithin if you were making chocolate at home (that’s what the Scharffen Berger reps told me when I asked).  There are, however, some chocolate bars on the market that don’t have lecithin.  I found a good one last year at Trader Joe’s.

However, there’s also the issue of sugar in the chocolate.  I looked at all the bars in my pantry right now, and they all contain “sugar” — which, as mentioned above, probably doesn’t pass muster.

If anyone knows of chocolate bars that use evaporated cane juice, or another less-processed sweetener, please let us know!

Okay, I think that covers many of them for now.  If other specific questions keep coming up, I’ll update this post with what I can figure out.

Thanks again to everyone who is participating in the challenge!  I’m very excited to see what October has in store! Starting October 1st, I’ll be sharing some incredible guest posts every day.

Don’t miss a single post!  Sign up to receive posts via email (no more than once a day) or by RSS feed.  And, of course, I’ll be linking to new posts on Facebook and Twitter — as well as keeping a close eye on the #unprocessed hashtag discussion, of course!